Oh. My. God. This is the best Chex mix I have ever had. I originally found this on Pinterest, but adapted the recipe from Just Another Day In Paradise. I love churros (some of my friends said it was like cinnamon toast crunch too) and immediately wanted to try out this snack. I brought this up to my girls weekend in Door County and we gobbled it up (I left a bag for Ron too for a March Madness snack).  I adjusted the cereal and sugar amounts to my tastes and I thought it turned out really well. I already decided that I am going to send this with Ron for a snack at his next cribbage tournament.... mainly so I get to eat it again! 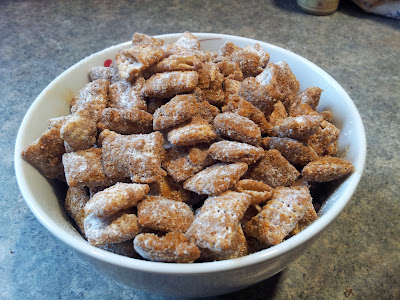